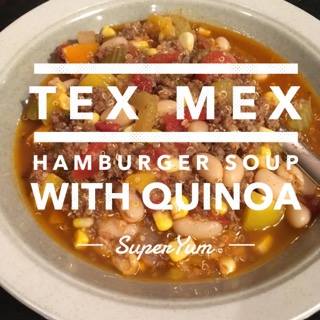 Looking for a shake up on the traditional Hamburger Soup (and having a few extra veg in my fridge I was hoping to clean out) this little meal-in-a-bowl gem was born. I do love a balanced meal in a bowl!
Extra Lean Ground Beef (approx 1lb flat)
1 onion, minced
6 celery stalks, diced
2 colored peppers, chopped finely
2T chili powder
2 teaspoons cumin
1 teaspoon oregano
1 tetra pack of beef broth
1 can of diced tomatoes
3/4C quinoa (dry)
1C frozen corn
1 can of white beans (what I had on hand, black or kidney would also work)
In a large pot cook the ground beef until browned, drain if necessary and add in onion and cook. Add in the celery & peppers and cook until tender crisp. Add seasonings and stir and cook until fragrant. Add the broth & tomatoes as well as quinoa and bring to a boil, then reduce to a simmer. Cook until quinoa is cooked (about 15 minutes) and then add the corn & beans.
Serve with plain greek yogurt and/or avocado and a sprinkle of cilantro for garnish. I had none of this and it was great! Some of the famjam wanted a bit more kick and added some Franks! Would also be great with a sprinkle of sharp cheddar shredded on top!