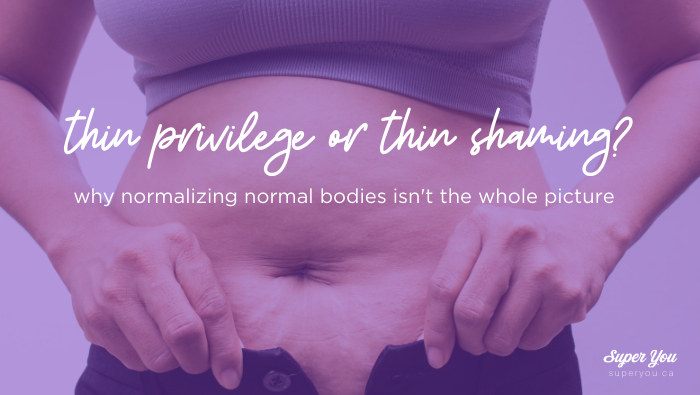 It was from Fat Activist and Clinical Social Worker Lisa DeBreuil. Here’s what it said:

“Newsflash: if you have sit or contort your body in certain ways in order to have “fat rolls,” then you don’t actually have fat rolls. What you have is Thin Privilege.”

I shared it with a note that it spoke to me. Because it does.

The post didn’t get a lot of reactions. Which surprised me (sort of). I know it’s a bit edgy (dare I say a bit political), which is a bit out of the norm for me, but it’s certainly in line with my anti-diet and HAES® philosophy. Which means nothing my usual followers haven’t seen before. So I was a bit surprised by the lacklustre response.

So the next morning when I got a message about it, the penny dropped. Oh! I’d rubbed people the wrong way! I made them uncomfortable…huh.

(which for the record, I don’t mind doing. I genuinely thing that we all need to get a bit more comfortable with being uncomfortable if we are to affect change and truly shift our cultural consciousness)

The message I received about the post was from someone I deeply respect both personally and professionally. They shared with me that they normally love my posts, but were struggling with this one. They felt it was shaming thin people.

Ouch. Shame? Me? No! I took a minute to ask a few questions and we had a great dialogue. Then I percolated.

Whenever I’m called out, especially by people I respect. I think it’s important to pause, ask questions, have a dialogue and to really reflect. In the era of increasing awareness and rising cultural consciousness I think it’s critical that we stop and evaluate.

Had I mis-stepped? Was I simply shaming the thin people? Because shame is never my intent (at least not consciously).

But did I have a concealed or subconscious bias here? And was that manifesting as “thin shaming?”

Before I dive into that pool of murky thick swamp water, let’s talk back story. Because in the conversation I had with the friend who called me out, they actually said “is this a thing?! Are people actually doing this?!” They were surprised. So let’s start by clearing that up.

Lisa (the author of the post I shared) was speaking up about to the new “trend” on social media (primarily influencers on instagram) where people slouch/ sit/ contort their thin bodies to accentuate or highlight “their rolls.” It is generally shared with a commentary about loving your body, or embracing your body from all the angles, and often with the #bodypositive or #bopo.

I’m genuinely seeing more and more of this (on instagram especially). This is not me calling any singular person out – but calling out a trend. Because honestly, I find it disconcerting.

There are three layers to my concern with this trend.

On one level I’m concerned with the use of the “body positive” in alignment with these images. There are actually two key reasons here:

Secondly, I want to get curious about the actual intention of these posts.

Because I’m not in anyone else’s head (but my own) it is unfair and judgemental of me to assume I understand the actual intent behind these posts. My own biases and beliefs are always going to taint my assumptions.

I have no doubt that some of these images are being shared with authenticity and with the intent of supporting a more inclusive and “real” feed – yay. Certainly there seems to be an intention to help normalize normal bodies – also yay! And possibly there is even a genuine desire to help shift the cultural consciousness – super yay!

But I do question the motive of some of these influencers and would invite you to as well.

As with all media – instagram and facebook are marketing machines. Marketers (which includes instagram influencers) are being paid to present products or a message to get our “buy in,” and in many cases – to get us to buy. Their job is to portray or position themselves in a way that draws us in and win their trust and belief.

When those same companies or influencers are also promoting programs and products that are deeply entrenched in Diet Culture, I think it’s not only valid, but crucial that we question motive. If on the same feed you’re sharing one of these “Bo Po” images, you’re also sharing before and after photos and products intended for weight loss, what is your intention? It would seem (to me) that you have a really incongruent message. Are you accepting of all bodies (bo po) – or not? Because suggesting bodies should shrink or that they’d be better “after” just doesn’t seem Body Positive to me.

My challenge to you: Begin to question your feed. Ask yourself, what is the intent of the pages you follow? Is the messaging they share congruent or incongruent? Be mindful as you scroll!

Thirdly, I have concerns that these images are being lauded as powerful steps forward towards equality and body diversity, and I genuinely don’t think that’s true for the majority of these images.

I don’t think normalizing normal aspects of bodies is truly celebrating body diversity. Cellulite is normal. Extra skin is normal. Skin folds and fat folds when you sit, is normal!

Is it important that we see these images and normalize normal bodies? YES!

We (desperately) need to normalize cellulite, extra skin, stretch marks and fat folds! We need to see bodies from all the angles. We need to see more images that are real and relatable in our feeds. It is absolutely true that seeing more bodies looking how bodies actually look in different positions, moving, being and living is important and will help many people feel more comfortable in the skin they’re in.

This is some of the necessary unravelling required from years of seeing strictly perfectly posed, filtered, digitally altered images. And it’s not the whole story.

We need to go beyond this normalizing of normal and recognize that this is not the full spectrum of body diversity we so desperately need. It’s a step in a positive direction, but it’s really more of a tiptoe.

Right now the majority of these images we’re seeing in this trend are of young, white, relatively thin, able-bodied, cis-gendered women. This is not diversity.

Let me be really clear: It’s not wrong. But it’s not diversity.

It’s a step, but a very small step. And because of the sheer volume of posts like these I am concerned that the full range of body diversity we could be seeing is getting “lost” in the feeds.

The images shared by these young, white, relatively thin, able-bodied, cis-gendered women have a lot of algorithm pull because they’re images that are more congruent with the image perpetuated by diet culture (even if they are a slight departure). Which means our Diet Culture infused minds view them more favourably – leading us to like, comment and push them up in the algorithm.

Am I saying these images shouldn’t be shared? Not at all. As long as their intent is to normalize normal and encourage others to view their bodies more positively – great. Heck, I’ve even shared some images in these veins. It’s ok. But it’s not the whole story.

We need to ensure that Fat Activists and Body Positivity Advocates have a voice too – that aren’t lost in the algorithm.

How can we do that? Here are some ideas:

So, back to the question at hand: was I indeed “thin shaming?”

Before I can go any further I think it’s important that we define what is meant by “thin privilege.”

Having “thin privilege” means you have greater access to resources and face less discrimination in society because our society favours your body aesthetic.

It does not mean that you’ve never experienced body shame, been bullied or teased, that you have a good body image or that you even view yourself as “thin.”

Fellow Intuitive Eating Counsellor and author of Anti-Diet, Christy Harrison puts it beautifully in this quote from her blog:

“People in larger bodies (i.e. people who wear plus sizes) face consistent, systemic oppression—not just body-shaming by a few individual assholes, but an asshole culture that makes it difficult or impossible to find clothes and spaces that fit, healthcare that’s effective and non-discriminatory, equal access to employment, and all of the other basic human rights that we all deserve.

The term “thin privilege” is meant to highlight this systemic disparity, and to call out the fact that dignity and respect and equitable treatment shouldn’t be privileges reserved for smaller-bodied folks at ALL—they should be universal rights afforded to everyone, no matter their size.”

I’m not saying I don’t want to see their bodies. I most certainly do! But I want them shared with intention. And viewed with a mindful eye. I want them to share images of their bodies not because being “body positive” is trending, but because they want to affect change.

And I want to ensure that the fundamental message of the Body Positivity Movement isn’t crowded out by pictures of thin white able-bodied cis-gendered women who are simply trying to up their “influencer” status.

I want to ensure that Fat Activists have a platform to speak to the damage Diet Culture, weight bias, fat phobia, and oppression has inflicted upon them. I want people who have been marginalized and stigmatized because of their bodies to have a voice.

I want to see ALL bodies accepted.

I want to see ALL bodies respected.

I want to see ALL bodies celebrated.

But I genuinely feel that in order for that to happen we need to give voice and visual to the bodies who have historically been under-represented or mis-represented.

A final word from my Intuitive Eating Colleague Ragen Chastain: “The good news is that dismantling fatphobia (and the Diet Culture that perpetuates it) can help people of all sizes feel better about their bodies.” 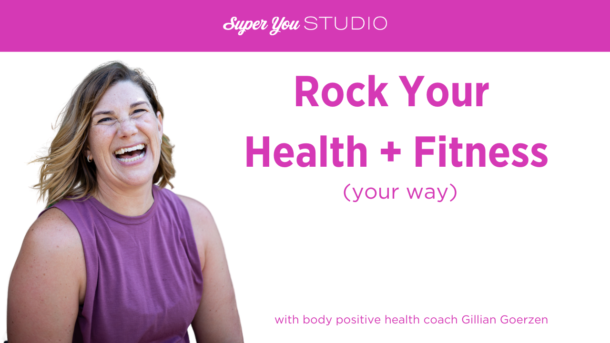 In this FREE workshop, you'll discover...

What's actually getting in your way (and what you can do about it, starting today!)

A mindset + tools to help you navigate the real-life hiccups like getting sick, work deadlines, and vacations (without throwing in the towel and getting "back on track" after).

How to set yourself up for success by building adaptable, personalized (and body-positive) health habits!

You're in! Check your inbox rockstar!

Discover the secret to sustainable health that diet culture doesn't want you to know (it's simpler than you think)!