Travel Fast on the Trails 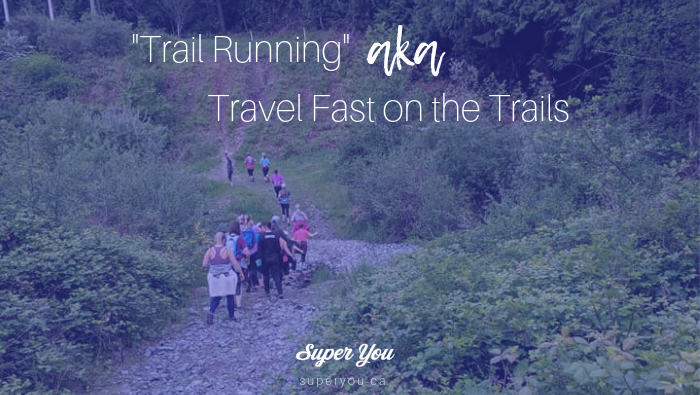 This weekend I had an awesome conversation with my learn to run muddy group. This group clinic is a progressive walk to run program (aka learn to run) off the road and onto the single track in and around Westwood Lake.
We were tackling a big (read: really steep) hill but we were during a “run” interval. I encouraged them to power hike (hike with some oomph) instead of running because it’s more efficient. They were all kind of shocked I’d say that (we were mid-run-interval after all), but once I explained why, they “got it.”

I want to shatter the #1 mis-conception about “trail running,” are you ready?

MOST trail runners don’t run the the whole time.
Ok, I’m sure the speed goat’s at the front of races might be in a racing situation, but for the majority of us recreational runners out there for a social run to enjoy nature and get in a fun workout (read: 99% of the runners out on the trails) it’s more efficient and enjoyable to actually hike the bigger hills and then run the flats, downs and rolling sections.

Because when you run up a steep hill your heart rate and breathing rate spike (big time). There’s a BIG cost in spite of the fact you’re not moving very fast. Why? It’s HARD work to run up steep hills!
And while I’m all for embracing the hard work, I’m also about efficiency. And here’s the bottom line:
Depending on how steep the hill is you may be better off power hiking and NOT running. Here’s why:
If you run, once you reach the top of that hill you’re likely so spent you can’t travel well (or very quickly) through the down, flat and rolling. You lose some steam and frankly kill some of the joy.

So, what’s the strategy?

Start to get a feel for your ability/ effort on hills. Make a call on certain hills about whether it might be more efficient and effective to power hike up, then really give’er on the downs, flats and rolling sections. You might actually find that overall you’re faster taking this approach (and you might enjoy it a bit more too)! #winning
What’s this about gaining time? Yeah, most of the time you’re SLOWER running up steep sections, then just power hiking. AND, if you power hike you’re not only not completely killing your momentum, you’re conserving energy, so when you get to the top you can let ‘er rip! Yup. Read: You’ll be faster overall.
So don’t get stuck on the word “running” in “Trail Running.” Instead consider it travelling fast on the trails. Hey, that’ might just have to be the new name for Learn to Run Muddy…”Travel Fast on the Trails” – what do you think?
PS. If you really want to improve your efficiency and efficacy on the hills, definitely run some. In fact, we do exactly that in Run Strong on the Trails. But just know that overall, sometimes you’re better off doing a solid power hike – especially on longer “runs!”
PPS. Kudos to my awesome Learn to Run Muddy Crew for coming up with this alternate name. I love it! #travelfastonthetrails
PPPS. BONUS: by power hiking you also might be afforded a better opportunity to enjoy the view (which frankly, is one of the TOP reasons I LOVE to run the trails) #happyheart